What is the difference between a coin and a token? 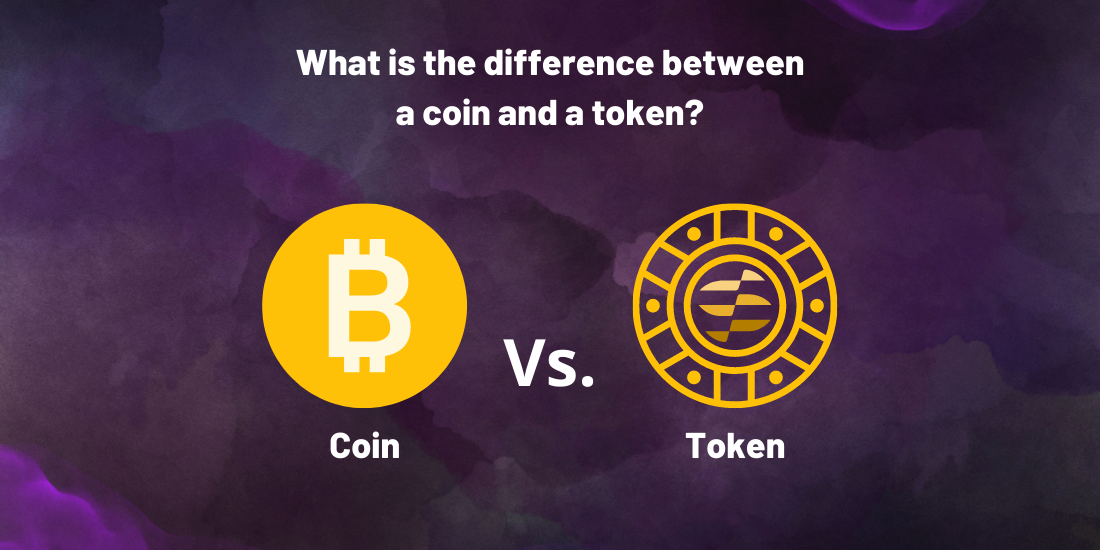 In our talks and discussions with clients, we often hear clients and prospects mixing different concepts, whereby blockchain, wallets, web 3, metaverse, mining, minting, coins and tokens are thrown on one big pile. The domain of crypto is quite vast so we fully understand that novice digital managers and marketers are not always spot on with their explanations. Therefore in our educational series on crypto, this time we go a bit deeper on the differences between coin and tokens.

First of all, coins are the most popular and most known – even your grandmother has heard about bitcoin. These crypto coins are a cryptocurrency having its own blockchain, which stores the value and validates the transactions. These fungible coins are being mined (mostly via a energy intensive Proof of Work process). Wide-known examples are Bitcoin, Ethereum and to a lesser extent Solana. Lots of other coins are also available.

Now what is the difference with a token?

A token does not have its own blockchain. It uses another blockchain (like Ethereum) to exist and operate. Typically you read about launches of tokens as ERC-20 tokens. Ethereum is a very popular blockchain to launch, however there is no hard requirement to launch on Ethereum, you can perfectly use a DLT like Hedera and its HTS.

Tokens can also be bridged from one blockchain to the other. For example, the future Sayl token will launch on Hedera, but will be later on bridged to Ethereum.

In terms of terminology, here’s an interesting one: tokens get minted, coins get mined. As we already mentioned, a token minted on Ethereum is called an ERC-20 token. When it is minted on a blockchain like Solana, it is a SPL token.

Why a token and not a coin?

A coin inherently comes with the notion that its primary use will be a transaction: to purchase or to sell an asset. However, not everything in the world must be sold. Tokens are specifically handy when used as Utility Token, like the Sayl token will be an example. With the Sayl token you can not pay, but you can exchange the token for exclusive rewards, or to get your hand on a NFT.

Tokens are also cost effective and simple and easy to setup and use: you don’t need to create an own blockchain (you use an existing one) and creating a token and minting is for every developer not a huge effort. Also, since you inherit the functionality of the blockchain, it is much safer and more stable.

Teams that focus on launching a token are very product focused: the team behind Sayl is driven and passionate about making a platform that connects consumers with brands and the energy is put to make the best utility. Compare this to a coin team, that have to focus their effort on their blockchain and its functionality.

Interesting to note is that it’s not that you chose to be a token, that you can not convert to a coin. A popular token like Crypto.com started as ERC-20, but later on moved to a coin named CRO. Crypto had enough dollars in their pocket to develop their own blockchain named Cronos chain. Since the token had become a coin, early backers were invited to migrate to the new CRO coin.

Are there side cases with regards to coins and tokens?

Coins that live on other blockchains than their own blockchain are represented as a token. This is best explained with an example: When you buy Ether on Solana, you are not really buying Ether. What you are buying is a token representing Ether in the Solana blockchain called ‘Wrapped-Eth‘. The blockchain’s developers did some magic to peg the value of the token to the underlying Ether value. When you sell the token, you’re not really selling Ether but rather wrapped-ethereum.

Now what happens if you send your so-called Ethereum-not ethereum to an Ethereum based exchange? The wrapped-ethereum will first be unwrapped by swapping the wrap for real straight Ether. Subsequently, this unwrapped ether is then moved out from the Solana blockchain.

A regular Ethereum transaction has an average gas fee of $20 dollar or (much) more – depending on how busy the network is. Compare that to a transaction on Solana that is only $0.00025… Fees is a hot topic in web3 and a lot of innovation is ongoing to bring fees down, so definitely new use cases will pop up the coming years.