What are the differences between Web2 and Web3? 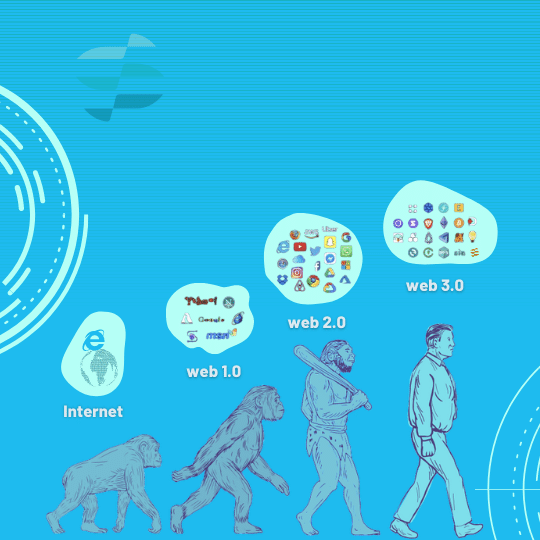 We’re pretty sure that you heard a lot about web3 and the sheer range of possibilities it will bring to the billions of people on planet earth. But as it is important to know where we go, it’s to know where we come from. So let’s quickly go back to the first two versions of the web.

Web 1.0 is often associated with a version of the web where you accessed information, without being able to easily create content yourself. While this is only a mere 20 years ago, a bunch of Bitcoin millionaires weren’t even born back then. It was the good ol’ times of Yahoo and oh gosh – does anyone remember Netscape Navigator?

Web 2.0 is the web in which we are evolving today, the web of social networks. Everyone can very easily share their opinion with the world, but most of the exchanges are centralized by the big platforms: Facebook, Twitter, TikTok, etc. The Web 2.0 is commonly referred to as the GAFA owned playground with Google, Amazon and Facebook reigning the kingdom.

Like any new version of something, Web3 promises wonders, and above all to do better than the previous version. In this case: do better than GAFA, by giving more power to users and content creators.

Web3 refers to a third generation of the Internet where online services and platforms move to a model based on blockchains and cryptocurrencies. In theory, this means that infrastructure is decentralized and anyone who owns a token associated with that infrastructure has some control over it.

Web3 is also based on the principle that data (which has been a favorite of the Web 2.0 GAFA giants) is no longer the only currency. In Web3, we invest (with cryptocurrencies) and we can potentially have a return on investment, even as an average user. For example, we launch an own utility token name Sayl token in the upcoming month.

The Web3 remains to have for the moment quite a barrier to entry, and there are many barriers: a cryptocurrency wallet, downloading dedicated applications, learning a certain vocabulary (NFT, DAO and company)… Luckily for you as a reader: with Sayl Conn3ct our mission is to tear down these barriers to start in the web3 space.

Since web3 is not simply one single concept, let’s take a look at some of the most important concepts.

Some influencers, artists and creators of the web create a token, a cryptocurrency associated with their popularity and their career. Their fans invest, earn benefits, but above all see the value of their investment increase if/when their idol’s career explodes. There are too many tokens launched already to give as an example here, what you need to consider is that without the right tokenomics a token isn’t worth much.

These discussion groups are accessible by investing in the token associated with the community. The group somehow shares a common account, and makes decisions together. Friends With Benefits, which brings together “Web3 thinkers” works on this principle.

Metaverse projects such as The Sandbox are virtual games in which users can buy virtual land in the form of NFTs and create their own game to generate income from it. A lot of high profile brands and even fintech banks are joining the metaverse hype. There is still a lot of scepsis around metaverses, where people that are old enough to know ‘Second Life’ say that it’s the same old story in a new jacket.

Apart from the above high-level concepts (which we will explain in-depth in future blog posts), when looking for further differences between web2 and web3, we can see following on the topic of ‘data’:

For web2 that is quite easy to answer: no, you don’t control the data. As a user, you are simply obeying to incredibly long terms & conditions that no-one reads. In the fine print obviously, there is a “all your data belongs to us”.

In web3, in theory your data is stored on the blockchain and you are the owner of the data whereby you control the terms & conditions (via smart contracts) and potential compensation for your content creations. Of course, smart contracts are only as good as how they are created.

Can you switch to other providers?

The best example here are games. In web2.0, take a game like Call of Duty: everything that you buy in the game is really in the sandbox (no pun intended) of Activision (now Microsoft). Once you leave the game or dump the game, your purchased items are sitting on the servers of Activision.

While the idea of a third version of the internet has been brewing for a long time, it now remains to be seen how it will be in reality. And as we are more and more relying on the internet in our daily lives, knowing how to leverage the new capabilities of Web 3.0 is crucial for you as a user, business owner, content creator or investor. It is shaping the way we live and it is here to stay.